Graham Arnold in Search of new talent for Socceroos 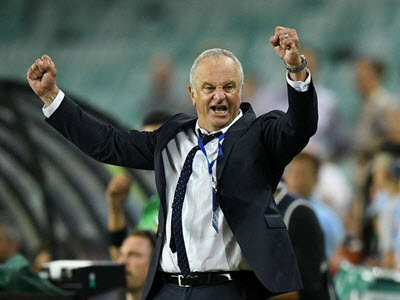 Graham Arnold, the Australian coach for the Socceroos, continues his search to rebuild his national soccer squad ahead of the Asian Cup. He has named four uncapped players to join his training camp in the UAE this week.

Three of the four players will also be measured for a potential place in Graham Arnold’s first match which will be a friendly on 15 October against Kuwait, with Martin Boyle currently unavailable as he needs to wait for international clearance before he can represent Australia.

Martin Boyle, the former Scotland youth international, is going to be joined at the training camp by Thomas Deng, a Melbourne Victory defender, Denis Genreau, a PEC Zwolle midfielder, and Awer Mabil, an FC Midtjylland forward, as the only players that haven’t won a cap as of yet.

Martin Boyle is a teammate of Jamie Maclaren and Mark Milligan in the Scottish Premier League, and although he is eligible to play for the Socceroos due to his Australian-born father, Boyle will only be able to attend the training camp.

“We have no doubt that we managed to select a well-balanced squad to participate in the Kuwait City clash as well as the UAE,” Arnold stated on Friday afternoon. “These sensational players will have the perfect opportunity to enhance the principles and standards of play which was established in Turkey, and more importantly, have the opportunity to implement new styles which we have been working on ahead of the international match against Kuwait in October.”

Arnold also made the vital decision to recall Tom Rogic and Mathew Leckie to his national squad for the first time since the World Cup in Russia in 2018. This clearly indicates that Arnold is keen on creating a competitive environment ahead of the UAE where they will participate in the Asian Cup.

“Although some soccer players have managed to miss out on this training camp, they, as well as loads of other soccer players on a global scale, will remain firmly on my radar while working towards the crucial step of selecting the best national squad to assist us in excelling at the AFC Asian Cup next year,” Arnold added.

The former FC manager for Sydney will also name a new captain as Mile Jedinak, unfortunately, retired from international soccer last week. The Socceroos will also be facing South Korea on 17 November in Brisbane and Lebanon on 20 November in Sydney to help with their build-up for the Asian Cup which takes place from 5 January to 1 February 2019.